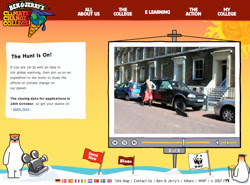 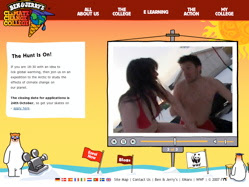 WHEN: October 30
WHAT: Ben & Jerry's Climate Change College
WHAT... MORE?: If you are 18-30 with an idea to lick global warming, then join us on an expedition to the Arctic to study the effects of climate change on our planet
HOW MUCH: Free!
URL: http://www.climatechangecollege.org/home.php
COMMENTS: Not too sure about clips I saw. Looks less than constructive. And more like a party in the Arctic. But as I am ineligible it's academic (geddit?).

What go me here was a thing on a social enterprise site that said 'The Climate Change College consists of a nine month business mentoring programme and a £5000 grant for each successful candidate to launch an entrepreneurial project to tackle climate change.' If you can find it... good luck!

I've written to them:

A little intrigued by the website - have you watched it?

I was not to clear about how the money is dispersed.

But also noted the first project seemed to be vandalising 4x4s.

The second seemed to be saying saving the planet requires travelling (er, how?) to the icy wastes to have parties.

Not against fun (noting it is a very ageist effort as well - why 30 as a cut off?), but if this is what is being promoted, as I can't honestly endorse it much.

I have had a very thorough reply, thanks to the press office:

I checked out the website before putting it in the newsletter and feel confident that it has a responsible attitude. The students do go to the Arctic but their travel is offset through a carbon offsetting scheme and they go to learn the effects of climate change firsthand to be successful ambassadors.

As for the funding, I think this par covers it roughly:

The College consists of a 9 month business mentoring programme (worth €21,000 per student) and a €7,000 monetary grant to launch a unique project. The programme is largely virtual with a 1-1 mentor, except for a 3 day workshop in Brussels in February and a two week scientific field trip to the Arctic in April. All travel is covered by Ben & Jerry’s and is offset through Cool Your Jets which invests in renewable energy projects.

The videos do have a comic aspect (incl the partying in the arctic bit) because they are trying to appeal to young people, and its very much in a Ben and Jerry’s style. The vandalising 4x4s is a jokey ad that ends with the words – There are better ways to fight climate change.

I do take your point about ageism but hundreds of programmes are directed purely at ‘youth’ including a number of government funded programmes (for example the Make Your Mark Campaign) that we are involved in.

And while I can concede most, I did have to make the following points:

My main concern was the 4x4. I honestly missed the end because it went on a bit and I thought it was not something I could support so I clicked off.

I wonder how many others might have done the same?

I made the ageism comment more on a personal basis having been excluded from a Guardian cartoon competition on the same basis.