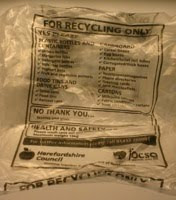 A long time ago, in a land, well, right here, I helped with the creation of a kerbside scheme:

However, we are now at the end of an era (must remember to mark on the site pages).

Not to mention 20,000 blue plastic boxes (seems we get to keep them. Yeah, right. Other than me I can see everyone keeping a bunch of additional dirty, smelly containers. Look out landfill!)

Because we are all getting wheelies.

Because, in advance of 'W-day' in November, I got a ton of literature (all of which seemed to say the precise same thing - I guess they want to kick off the paper recycling with a bang) and... a 2kg roll of plastic bags.

Then I read one of them.

No textiles... no problem (The Can Do Crew and REthreads - two other Junkk-assisted local services are alive, well and serving the community still... until the box tickers descend here too, when their mates see some profit in this no doubt).

As ardent reusers, this is the one category we do recycle a lot, simply because of the volume generated and lack of major reuses we can think of... yet.

Now, it seems this all arises due to a confluence of circumstances.

First up, though we have a big house and grounds, it is 'on the street'. Which apparently means our wheelie would block the pavement. How putting out a bag wouldn't, and RE:Boxes didn't before...?

Then there is the 'elfinsaftee of glass in the bag.

So.... a ton of plastic boxes are being scrapped (I presume) to make way for a ton more plastic boxes most in the town or flats can't use, so we end up with plastic bags that won't accept glass.

This is not making much sense to me at present on any level. I have demanded a wheelie and will have to resolve access to it on collection day.

The only positives (so far) are that they will take (some) plastics and there will not (for now) be a trained sniper across the way should we pop the wrong thing in by accident.

But I do note they don't want them squashed. So a big truck is still moving 95% fresh air?

I am looking further into this. There is the council website. No mention of reuse or Junkk.com I can see. Ta, guys!

And, having called to ask what happens to all this carefully sorted recyclate, and being told it is on the above site (not yet, it seems), there is this fun fellow to trawl: http://www.envirosort.co.uk/