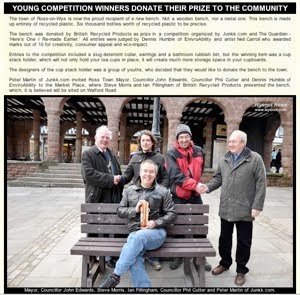 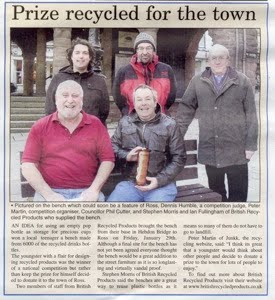 Well, it all worked out with some nice media sharing a nice story in a nice way. 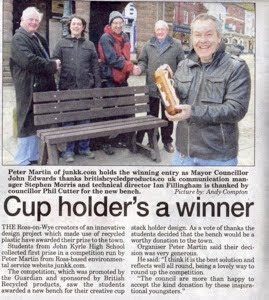 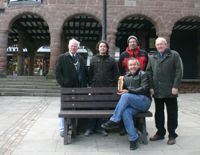 At long last we had our much postponed handover of the winning prize donated following the reuse competition.

The bench arrived by the skin of its teeth, and we duly set it up in the Market Square.

Then, at one stage we had press but no worthies, and then worthies but no press.

Anyway, one way or another we ended up with a bunch of shots of a bunch of folk and with luck this happy end to an epic competition will see a fair bit of PR, one hopes enough that the generous kids who made the donation will think it worthwhile and know how much it is appreciated.

With me are Stephen and Ian from sponsors BRP, flanked by Councillor Cutter from Hereford and Mayor Edwards of Ross.

After a chance conversation with a charming reporter from the Hereford Times, I have been forwarded the piece they carried, which I managed to miss:

A NEW bench made from
thousands of plastic bottles
has been donated to the
people of Ross.
It comes after local
teenagers won a national
newspaper competition in
association with Junkk.com,
a re-use ideas website.
Entries were invited to
suggest ways that plastic
items, usually thrown away,
might be diverted to
productive second uses.
"It turns out that a group of
teenagers had jointly come
up with the idea, and just
submitted it for fun," said
site owner Peter Martin.
"They frankly had no easy
use for such a thing, and
asked if they could donate it
to the community, to show,
paraphrasing their words
'that not all kids are all take
and no give, and we do care
about where we live'."
The seat was handed over to
councillors in a ceremony in
Market Square.
Posted by Peter at 10:47 am