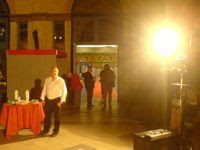 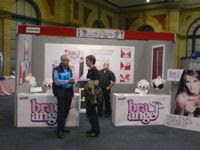 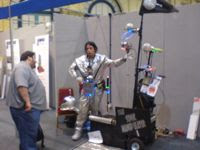 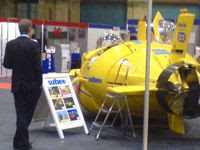 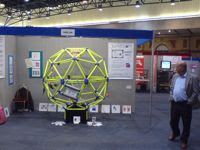 1. Lights, camera... cancel! My 15seconds of fame dropped as footage of a reality star comes in.

4. The BBC surveys a major exhibit.

5. I decide an empty stand deserves the Junkk treatment.


I once wrote a song entitled 'The Buffet of Broken Dreams'.

It was when we were at a music event in the USA, and I came across a table strewn with CDs and tapes that various attendees hoped an A&R guy or radio station would snatch up.

In reality, they were either ignored or merely taken by others vaguely interested in what the 'competition' was up to.

All the choice stuff was already long on its way, pre-determined by the needs of the organisers, the dark arts of paid promoters, and the need of the media for something interesting and, outside of radio... 'visual'.

Don't mess with the FO

It all didn't start well. Not for me, I hasten to add. I was on a little to lose mission at worse, though events did manage to conspire and collate as the days progressed.

For a start the stands were not ready to take their charges until the last minute, which resulted in much scrabbling by many. Fortunately my design was free-standing and so I had it up and active to insert when ready. But one huge aspect blighted the whole hall, and throughout, and that was the empty stands of those from overseas who had failed to gain visas in time. Some visitors did ask me why they were coming if it was 'The British..', but I really didn't have a problem. So long as the ideas were solid and as well displayed as travel restrictions impose. However there was a certain sense of 'you scratch my show's back, and I'll come to yours..' that tended to shape the way folk were treated. Money talks. Not great, therefore, being a charity case.

But soon we were off. The weekdays were a bit disappointing. Few punters, and not many media, who seemed to be more guided by the time-honoured investigative technique of going to the press room and being told who was worth looking at. I lost count of the times various peripheral stand Morlocks like me would try and rugby tackle a passing camera crew or scribe with a notebook, only to have determined PR Eloi ladies run very effective interference.

But breach defences I did, and when I managed to do so the signs were good. Even if luck was not often with me.

The weekend was much more fun, if potentially useless business-wise. But I did meet many, many nice members of the public who did go round all the stands and ask for a demo. None had a problem with RE:tie, understood its function and potential and wished me well as guaranteed users once on the shelves. With luck a few have relatives in high places.

I had/have no axe to grind this time. I have one of the top awards from an International Show, and have merely added some functionality to that base design. Though I have to say most public visitors were much more interested in that over the 'green' aspects, maybe due to the age ranges that comprised the majority of visitors (quite mature).

But I did find the judging system a bit odd. Basically you needed to be assessed by 3 in total. However, it was just who happened by your stand first, and with no tilt to expertise. And as one judged loved the idea I was at first quite encouraged, until at the end he produced a flyer for his funding service and asked me to sign up. Not, IMHO, the most objective or disinterested way to be judged by your peers.

Hence I was as intrigued as much by what won small (everything won something) as won big. And I really felt for those who had paid a lot, from money to time to emotion, behind some truly great, innovations/inventions, who had lost out to what was often either just a reworking of an old idea, nice prototypes or, frankly, stuff that has been done better by a lot of folk who really have better things to turn up to such shows to promote their wares. And are working in hugely complex areas with decades of research behind and ahead of them, all leading to peer reviewed papers at truly international levels.

One thing I have to give the organisers full credit for was the gala dinner... quite stunning, from venue to layout to food to entertainments.

Would I do it again? Doubtful, at least with the kind of invention that really excites me.

But I do have a few that I think may see value in the possible exposure this can lead to. Namely forking out for a stand to stand a better chance of having a tabloid crew swing by to stick a blonde (if I do not supply one myself) next to it and pen 'Cop a load of that' in a jaunty piece about barmy ideas to fill a page. Or to possibly tickle the fancy of Dragon's Den producers looking for fresh meat to throw to their ratings-above-all 'professional' employees.

In short, pretty disappointing, though I did meet some nice folk , some of whom my prove helpful as well. And one is all it needs. It's the digging for the gold dilemma... when do you stop, as that rich seam may just be a few feet further?

The trick is not to invest too much... time, money or emotion... unless you have fully appreciated how the game is played.

Not a lesson I have yet fully mastered, but I am getting better. Or is it just more world-weary?
Posted by Peter at 3:23 pm